It was the crack of dawn on Sunday morning, birds waking up, me struggling to shuffle out of bed in an attempt to prepare the Ferrari F40 in time for the truck to pick it up. Unfortunately, the only way to get the F40 around in Sydney, Australia is via the back of a truck. Let me tell you, I’ve accumulated five tow truck bills in 3 days alone! What are we preparing for you ask? 70 years of Ferrari celebrations held in Sydney in the way of a Concours d’Elegance event.

Concours d’Elegance, what’s that? Here’s a small snippet that I’ve extracted from Wikipedia, “ Concours d’Elegance is a term of French origin that means a “competition of elegance” and refers to an event where prestigious vehicles are displayed and judged. It dates back to 17th-century France, where aristocrats paraded horse-drawn carriages in the parks of Paris during summer weekends and holidays. Over time, carriages became horseless and the gatherings became a competition among vehicle owners to be judged on the appearance of their vehicles. These events are often held at automobile shows, after racing competitions or, especially in the United States, as a fundraising event for charities. “

Let me break it down in short, It’s where all car enthusiasts make their way to a common ground and compete to win with their cars, basically is, who has the best car in the most original condition. If you thought your school finals were hard, think again, the work involved behind the scenes in preparing your car for competition is immense. The average competitor spends weeks if not months in preparation for a day that occurs once a year.

This years Concours d’Elegance was held in the northern beaches suburb of Manly, a close proximity to a well known beach, beautiful sunshine with some great scenic views that expand beyond the horizon. Have I set the scene yet? If you’re a fan of Batman, then you’ll love the backdrop, you remember the Wayne manor in all the movies? well this is as close as it gets, a building purposely built in 1889 for the Catholic Church that is more than fit for a real life batman, in this case, the Ferrari Club of Australia Concours event.

The car of choice, the 1992 Ferrari F40, as we all know, the F40 is one of the most iconic 1980’s Ferrari Supercar, although I might argue that it is a hypercar, but lets leave that argument for another day. Let’s put this to test, if the following information causes an emotion, then you clearly understand what the F40 means to the world. The last Ferrari commisioned by Enzo Ferrari, twin turbo V8, stick shift, no traction control, no electronics, the absence of ABS brakes and 0-100 km/hr in under 4.0 seconds… the result? feel it?

If you need further convincing, try clicking on the window below where I’ll continue the story.

This article is written by Lecha Khouri at Supercar Advocates. 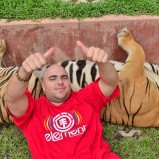